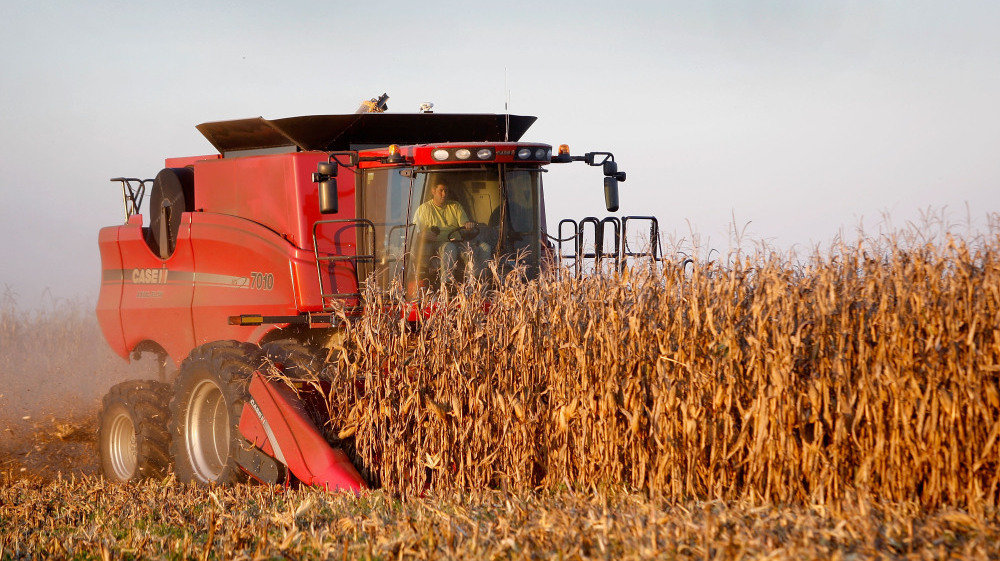 Joe Raben harvests corn on land he farms with his father and uncle Oct. 4, 2008, near Carmi, Ill. Some farmers say technological improvements and farming mechanization, not subsidies, are responsible for increased output.

These days, U.S. farm policy is blamed for a lot of things — even the nation’s obesity epidemic. The idea is that the roughly $15 billion in annual subsidies that the federal government gives to farmers encourages them to grow too much grain. As a result, the theory goes, prices drop, food gets cheaper and we end up eating too much.

It seems like a simple equation. But the truth is rarely simple.

The net effect of the whole set of farm supports is to make food more expensive and actually to discourage obesity.

Americans, on average, spend less than 10 percent of our money on food. A lot of people buy too much fast food — but from an economic standpoint, it is a good decision.

“The smartest, most rational decision is to eat the crappiest food, because everywhere you turn it’s more accessible, more affordable and more convenient,” says David Wallinga, a senior adviser in science, food and health at the Institute for Agriculture and Trade Policy in Minneapolis. He is one of the people who say federal farm policy leads directly to overeating.

“What we’ve had is a cheap feed grain policy, or a cheap calorie policy, and that’s been pretty consistent from farm bill to farm bill over the last 30-odd years,” he says, referring to the bundle of legislation that includes agricultural subsidies.

So the farm bill helps make us fat, right?

Maybe not. Let’s take a closer look at this whole picture.

Technology Has Made Farmers More Productive

Ken McCauley, a farmer from White Cloud, Kan., says he is indeed growing more corn — but not because of subsidies.

“The expansion that you’re hearing about in agriculture today, or for the past several years, is all about the machinery and the easy of work,” McCauley says. “Your work is easier because of machinery and technology.”

On McCauley’s farm, his son Brad charges back and forth over the land in a self-propelled sprayer. The machine, which looks like a monster bug – a green tractor on stilts with booms stretching 90 feet like enormous wings – is trailing a finely calibrated mist of herbicide. Bill Raben loads a grain truck as he helps to harvest corn on land he farms with his brother Oct. 4, 2008, near Carmi, Illinois. Raben’s family has been farming in the area for four generations. Farm subsidies are just one way the government can influence farming – there is a wide array of federal programs – some programs have the effect of lowering prices while others cause an increase.

“It steers itself, shuts itself on and off, so I basically just turn around and make sure everything’s running right,” Brad says.

The spray kills everything but the corn, because the corn has been genetically engineered to withstand the herbicide. And for good measure, the corn has also been designed to produce its own insecticide.

So now the corn plants grow much closer together than they used to and, weather permitting, produce twice as much grain per acre.

“Food productivity is more than doubled, so the real cost is less than half what it was 40 to 50 years ago,” says Julian Alston, an agricultural economist at the University of California at Davis. “That’s the big story. And that wasn’t caused by subsidies. That was caused by improvements in productivity on the farm.”

Farmers are proud of all that productivity, and it has driven crop prices down.
But shouldn’t farm subsidies themselves make food cheaper? When the government picks up part of the cost of something, shouldn’t the price go down?

Alston says not necessarily. “What’s wrong with that line of thinking is that it doesn’t pay attention to how farm subsidies actually do work.”

Subsidies are not the only way the government influences farmers. Some federal programs do make crops cheaper: Subsidized crop insurance and other traditional price supports make food more abundant and reduce prices. But some policies actually increase prices.

In that category would be “getting paid not to plant”: some farmers get federal money to let land lay fallow. That cuts production and raises prices. Same goes for tariffs – if there’s a tariff on imported sugar, it tends to boost the price of all sweeteners, including corn syrup. And ethanol production, which is supported by a federal mandate, now buys up about 40 percent of the corn crop — again raising prices.

“The net effect of the whole set of farm supports is to make food more expensive and actually to discourage obesity,” Alston says.

Robert Paarlberg, who teaches political science at Wellesley and Harvard, has tried pointing this out. “Farm subsidies have nothing to do with it,” he says. “You almost never get any interest in trying to make the counter-argument. People assume that you’re a crank if you dare to challenge what everyone knows to be true.”

There are some obesity experts who agree with Paarlberg and Alston, including Margo Wootan, the director of nutrition policy at the Center for Science in the Public Interest.

“I’m very concerned about how hard it is to eat well in America today,” she says. “Our food environment has evolved in a way that it’s almost perfectly engineered to promote or cause obesity.”

Wootan says that environment isn’t shaped by farm policy nearly as much as it is by food processors and marketers.

For example, even when corn prices doubled, the price of corn flakes barely moved. That’s because food ingredient costs are miniscule compared to other expenses. On average, less than one in five dollars consumers spend on food actually goes to farmers and ranchers. Shipping, packaging, processing and marketing and selling make up the rest of your grocery bill.

“Companies are really competing very aggressively to sell their food and not somebody else’s food,” Wooten says. “And that’s creating more and more food that Americans are eating, and as a result, we’re gaining a lot of weight.”

And as a Wooten’s group, the Center for Science in the Public Interest, regularly points out, processed foods are often loaded with salt, sugar and fat.