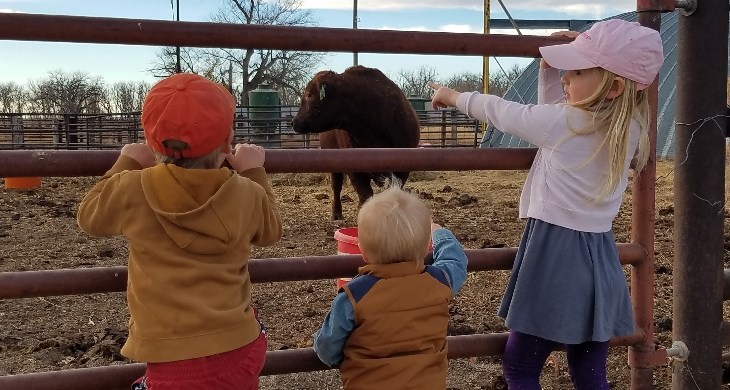 As a kid who grew up on our family’s ranch, it was easy to take things for granted. I knew where the beef in our freezer came from; I knew why we needed to feed the cattle; I knew why we were taking the calves to the sale barn.
But then again, we only raised cattle. So, I really was clueless about raising row crops, vegetables, fruits, etc. I later learned about all of these in school, and on into my college education—because I was in an agricultural field.
Now, think about kids who don’t grow up on a farm or ranch, and don’t have any family closely related that is still on the farm. #DidYouKnow, the average person is two to three generations removed from the farm? This means that they don’t have a grandparent, aunt, uncle, or close relative still on a farm they can go visit and learn about how food is raised. Most kids raised in the upcoming generation don’t know about food production and modern agriculture.
So, why is it important that they know about modern agriculture?

Many of you have heard about the amazing film, FARMLAND. This documentary takes an intimate look at the lives of farmers and ranchers in their 20s, all of whom are now responsible for running their farming business. If you haven’t, it’s available on Netflix and DVD, I highly recommend you watch! And more importantly, get young kids to watch.

Even though this film is about young farmers in their 20s, it is great for kids to watch. It will give them perspective about all of the points I mentioned above: future of agriculture, jobs in agriculture, and life exposure. Most kids have never stepped foot on a farm or ranch, or will ever have the opportunity to do so. This film will give them that exposure, will share with them why farmers today are using modern technology and equipment and will reveal job opportunities that they never thought of before. Some of the farmers in this film were not raised with agricultural backgrounds.

Published with permission courtesy of http://www.agonthe4front.com