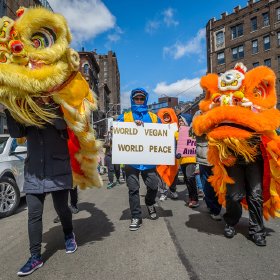 Photo credit: Pacific Press/Sipa USA/Newscom
http://www.weeklystandard.com/the-humane-societys-descent-into-abolitionist-veganism/article/2005167
This isn’t what well-meaning farmers were signing up for.

The Humane Society of the United States raises gobs of money (annual budgets over $100 million) by portraying itself as an animal rescue and care organization—check out its tear jerk ads—when that is just a tiny part of its work. In truth, HSUS has become a radical organization with an agenda focused on opposing traditional agriculture and banning meat, milk, cheese, eggs, and other animal products. Its leadership is a rogue’s gallery of extremists with histories of making outlandish statements, such as eating meat is “murder” and farming is a Holocaust.

HSUS sought to moderate its image by establishing state agriculture councils that ostensibly support farmers and ranchers who give “proper care to their animals.” HSUS says it helps “connect these farms to the market.” But according to ag council members, HSUS did nothing to help them.

HSUS’s most prominent ag council member was, until recently, Kevin Fulton, who runs an organic grazing operation in Nebraska. Fulton is truly committed to the humane treatment of farm animals, which is what attracted him to HSUS. At first, Fulton says, HSUS embraced him and the other ag council farmers. He had a “seat at the table” and used it to influence policy. He spoke freely at HSUS events and brought balance to organization.

But no more. “Abolitionist vegans” at HSUS opposed to animal agricultural worked to undermine the ag councils who see animals as an important part of the food supply. The relationship was also costing HSUS donors and money.

In embracing its radical agenda, HSUS is not only out of sync with its own mission statement, which says it takes a “mainstream approach,” but also its members. According to HSUS CEO Wayne Pacelle, “About 95 percent of our members are not vegetarian.”

Instead of defending the ag councils, Fulton says Pacelle allowed HSUS to become a “good ol’ boys vegan club” embracing an extreme agenda. It stopped serving animal products at its conferences and pushes “Meatless Mondays” nationwide, a bitter pill for an HSUS supporter like Fulton who raises livestock.

To mangle a metaphor, this is the vegan tail wagging the meat-eating dog.

The last straw for Fulton was HSUS’s “The Future of Food” conference earlier this month featuring a keynote by “ethicist” Peter Singer. Singer is at the forefront of the animal liberation movement and seeks to end moral distinctions between humans and animal species. (As a cat owner, I can tell you felines don’t have such moral qualms and don’t hesitate to show other species who’s boss.)

Infamously, Singer has defended bestiality and pondered whether a man having sex with a hen was any worse than “what egg producers do to their hens all the time.” So you won’t be surprised to learn that a thick steak—even one humanely raised—on the backyard grill is not HSUS’s idea of the future of food.