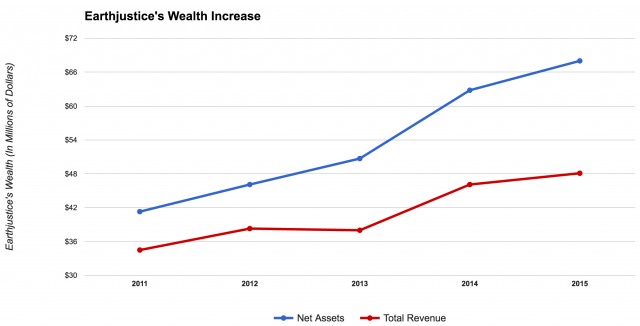 Earthjustice, an environmental law firm that grew out of the Sierra Club, has sued federal agencies at least 39 times since 2009. Using three environmental laws, Earthjustice has raked in nearly $4 million, according to a DCNF analysis of the Department of Treasury’s Judgment Fund, which tracks court ordered federal payments.

That means it’s possible Earthjustice sued the government many more times for much more money than TheDCNF uncovered, but the redactions make it impossible to tell.Earthjustice isn’t alone. TheDCNF found many environmental groups, law firms and attorneys have sued the government for millions of dollars in what are called “citizen suits.” Such lawsuits are often environmentalists looking to force a federal agency to issue more regulations.

“Citizen suits are often brought to enlarge environmental regulation beyond the scope of statutory authority and congressional intent, frequently with the willing help of overzealous bureaucrats and sympathetic judges,” Reed Hopper, an attorney with the Pacific Legal Foundation (PLF), told TheDCNF.

Activists not only use such lawsuits to further their own policy goals, they can also get taxpayers to pay for their legal fees. Republican lawmakers have been huge critics of environmentalists’ use of “citizen suits” to collude with agencies in what are called “sue-and-settle” lawsuits.

“Sue-and-settle” happens when environmentalists sue a federal agency for missing a regulatory deadline under the CAA, CWA or ESA; the federal agency opts to quickly settle the case and issue a new rule instead of fighting it out in court.

“When Craig Manson was Assistant Secretary for Fish and Wildlife and Parks, he had to institute a policy that all settlements had to be approved by the Office of the Assistant Secretary,” Julie MacDonald, a former deputy assistant secretary at the Department of the Interior under then-President George W. Bush, told TheDCNF.

“We still had problems with the Justice Department getting approval and moving ahead with settlements without assistant secretary approval,” MacDonald said of her experience with “sue-and-settle” lawsuits.

“There was not much we could do to stop it,” she said. “This issue, how the suits and the settlements work, is worthy of a longer conversation.”

A 2013 study by the U.S. Chamber of Commerce found 71 lawsuits between 2009 and 2012 qualified as “sue-and-settle,” resulting in more than 100 new regulations — many of which imposed more than $100 million in compliance costs every year.

The Chamber found the Sierra Club used “sue-and-settle” the most of any environmental group during that time. The Sierra Club is often represented by Earthjustice.

Earthjustice has done particularly well suing the government. Both the number of cases and the money Earthjustice recouped per lawsuit were significantly greater than any other identifiable group.

Earthjustice sued under ESA at least 13 times and made $184,000 on average per suit, but for all 237 ESA suits brought by various groups in the Judgement Fund, the average was only $124,000.

In contrast, PLF – a “legal watchdog organization that litigates for limited government,” according to its website – only took in $5,600 per case for its eight ESA suits over the same period.

Just one Earthjustice suit against the Department of the Interior, for example, yielded a $380,000 payment. That’s more than eight times the $45,100 Pacific Legal Foundation received in payouts for its eight cases.

“This may be because our cases require less work, or we are more efficient in our use of time, or environmental plaintiffs are milking the system,” Hopper said. “Attorney fee awards are generally based on the time devoted to a case and an hourly rate that is common for the type of case in a particular geographic area.”

“They work with law clinics, have students prepare the documents for $15-$17 an hour and then bill the government for $50,000,” MacDonald added. “These suits and settlements would not be possible without the calculated actions on the part of the Fish and Wildlife Service.” Earthjustice’s wealth increase according to its 990s. (The Daily Caller News Foundation/Ethan Barton)

Meanwhile, Earthjustice’s wealth has grown significantly in recent years. The group’s total annual revenue grew by nearly 40 percent to $48 million between 2011 and 2015, Earthjustice’s 990 tax forms show. Its assets increased by almost 65 percent to $68 million over the same period.

The group spent $2.7 million on lobbying during those years, and collected almost $13 million in court awards from 2012 to 2015.

“Seeking attorneys fees through citizen suits has definitely become a cottage industry, especially under the Clean Water Act where small businesses are threatened with litigation for alleged minor violations of the act unless the business settles with plaintiffs out of court for thousands of dollars,” Hopper said.

Earthjustice did not respond to TheDCNF’s request for comment.

Kevin Klenkel contributed to this report.

Content created by The Daily Caller News Foundation is available without charge to any eligible news publisher that can provide a large audience. For licensing opportunities of our original content, please contact licensing@dailycallernewsfoundation.org.