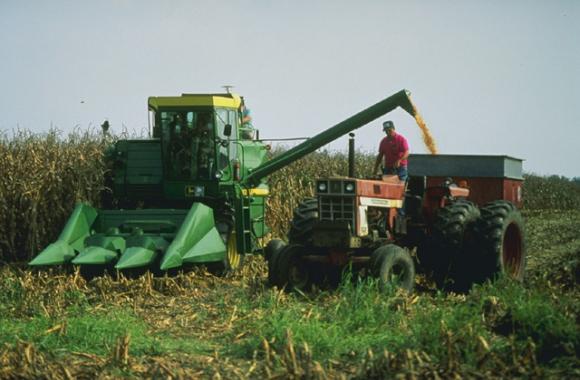 Combines harvest wheat near Roggen, Colo. Farmers and the poor benefit from subsidies in the Farm Bill, but so do other groups. Ed Andrieski AP

There’s something new to worry about in your food.

It’s linked to obesity, higher levels of unhealthy fat and inflammation, and it’s almost impossible to remove from our diet because it’s baked into the way we eat in America.

The primary recipients of the Farm Bill’s subsidies have long been America’s farmers and the poor.

The latest Farm Bill will cost $956 billion over its 2014-2023 lifespan, and $756 billion of that will go to ensuring that America’s poor have food assistance, or SNAP, benefits to help them survive poverty.

These benefits aren’t too high — in fact they’re far too low.

More than 80 percent of SNAP recipients report the roughly dollar-per-meal benefit runs out within the first two weeks of every month, and in general the benefits are too meager to allow the purchase of healthy food items.

The bill’s secondary beneficiaries, however, do much better. These are the companies and industries to whom the Farm Bill’s payments trickle up from the primary beneficiaries — and for them, subsidies are very healthy.

Around 18 percent of SNAP benefits are spent at Walmart, which stands to see $136 billion in revenue as a result of food subsidies.

And it’s not just retailers who do well. Consider the commodities we subsidize. Other than some livestock, we rarely buy these foods raw.

These commodities are grown to be processed, ultimately finding their way into a full range of packaged food and drink, as well as other industrial uses such as corn ethanol fuel.

The ultimate beneficiaries of food subsidies are neither the farmers nor low-income families, but the food companies that profit from low costs and a ready market for their products.

The result is that federal and market subsidies encourage cheap food with high social and environmental costs.

Even if we were to cut all federal subsidies to farming, the food industry would still be subsidized.

Agricultural laborers earn an average of less than $20,000 a year and lack legal bargaining power, benefiting the industry in which they work.

The children of some agricultural workers exposed to pesticides have IQ scores 7 points lower than non-exposed peers.

The environmental damage from industrial agriculture is also vast — we pay for cleanup, remediation and dead zones in our oceans — but rarely do these costs appear at the check-out.

There’s no nutritional additive we can sprinkle on existing policies to make them magically healthier, but a few avenues are clear.

We need actual living wages for all workers — especially in the food industry, where seven out of the 10 worst-paying American jobs are found.

There also needs to be more healthy food to purchase. That means more support for sustainably grown fruits and vegetables, so that those family farms ready to lead can feed the country rather than its gas tanks.

These two ideas would need to be part of a national food policy, with elements ranging from the restriction of food corporations to market their goods to children, to debt forgiveness for young farmers.

Raj Patel is a research professor in the LBJ School of Public Affairs at UT Austin.